Is there baby squirrels in my attic? 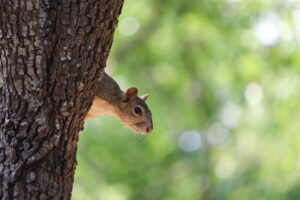 Pretty much every time squirrels are in the attic, it’s a single female who has a litter of young. If you remove the female squirrel while the litter of young is less than 6 weeks old, you will have a problem. Squirrel removal service Troy, MI handles all animals with care. It is very inhumane to get rid of a nursing female squirrel and leave the young behind.

Information About Nest of Baby Squirrels in the Attic

What is a squirrel’s breeding habits, when do they deliver, and how does it raise its young? As the season turns to spring you can be sure that squirrels will be starting the breeding process once again. Most squirrels have one mating time each year, except for one, the gray squirrel, in fact, has two. The mating time generally happens in January – February, with the second time happening in July – August.

The mating practices of the squirrel are not a romantic courtship at all. The female is ready for a male for a short time, usually lasting less than a day. She will produce a fragrance that can be detected by a male for almost half a mile away. The most dominant males will get the possibility to mate with the female first. Understand that practically all males that reach her will get a possibility to mate with her, just the most dominant gets to do it. This ensures that the female will most likely become pregnant if the first male is not able to provide her with the semen she needs to make that happen.

A squirrel’s gestation period is usually around 45 days. The smallest forms of the species can last no more than 35 days.

Where Do Squirrels Nest 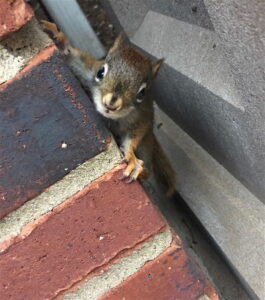 Many female squirrels look for an enclosed area, like a knot in a tree or an attic, to have their young. And do not forget, they enjoy residing in chimneys too: it’s like a big hollow tree. There are normally 2 to 4 babies in a litter, but some have been known to have as much as 8. The young are born with no fur but do have whiskers on them. They are rather defenseless when born, having neither the capability to hear or see.

The mom will look after the babies by feeding them until they are able to act separately. This can take from between 7 to 10 weeks prior to them having the ability to look after themselves. Even once they have become independent it is not uncommon for the children to remain in the nest for weeks after they are ready to go off on their own. The tie to the mom is rather strong and normally requires the mom to take a nearly hostile attitude toward them for them to finally move on. During the time they stay, they continue to hone their abilities preparing for full independence.

The whole process of mating to the time that the adult squirrels finally leave the nest can take as long as 24 weeks. This is why numerous researchers believe that the gray squirrel has the ability to mate once again in July – August.

Baby Squirrels In The Attic

If squirrel activity around your house makes you think you do have a nest in your attic, it may not be simple to spot. Remember squirrels like hollow trees, rock overhangs, and other remote areas.

If you do figure out that you have a nest of baby squirrels, you should now plot your next course of action. No toxins on the market are developed particularly to kill squirrels and infants less than 6 weeks of age still nursing. Traps are not practical either since young squirrels don’t leave the nest so they will not roam into a trap.

Removing a squirrel nest in the attic is hard work. You have to either look for it and eliminate the nest by hand, and then transfer the baby squirrels with the mother, or bring them to a wildlife rehabber. Or you have to wait 6 weeks after birth for them to be large enough to go outside. Don’t leave the nest of helpless young behind in your attic! They can scratch and claw, and if they can’t get out, they will starve, die, decompose, and cause an odor problem.