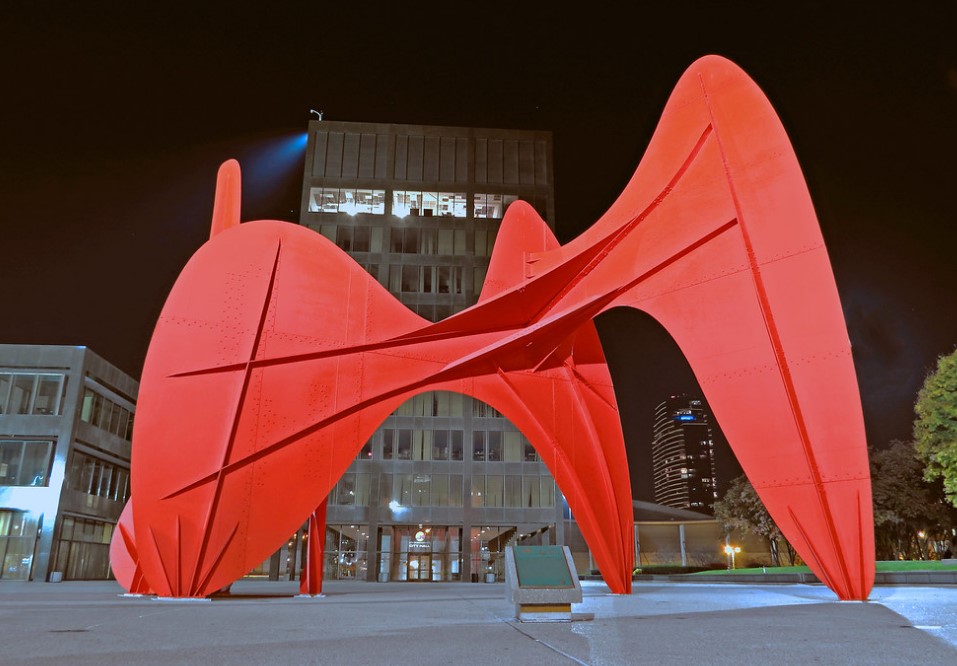 La Grande Vitesse, a public sculpture by American artist Alexander Calder, is located on the large concrete plaza surrounding City Hall and the Kent County Building in Grand Rapids, Michigan, United States. Commonly referred to as simply “the Calder”, since its setup in 1969 it has actually come to be a sign of Grand Rapids, and an abstraction of it is included in the city’s main logo design. Grand Rapids Michigan Information.

The sculpture was the first public artwork funded by the Art in Public Places program of the National Endowment for the Arts (NEA). Produced in Tours, France and assembled on the plaza, the steel sculpture is 43 feet tall, 54 feet long, and 30 feet broad, and weighs 42 lots. It is painted in Calder’s signature bright red. The title is French for “the great speed”, which can also be equated as “grand rapids”.

Calder’s design for La Grande Vitesse followed other significant sculptures he was commissioned to create throughout this duration in his profession. He dubbed these works “stabiles”, in contrast to his mobiles. The sculpture is a popular meeting place for residents and tourists alike, and it is the centerpiece of the city’s annual Festival of the Arts.

A panel of local officials and nationally recognized art experts selected Calder for the commission in 1967. Challengers composed letters to the editor and produced songs and cartoons deriding the sculpture, and advocates used the mayor’s bully pulpit and public service television to call attention to Calder’s credentials and vision.

Calder completed an 8-foot maquette in 1968, and started fabrication at the Biémont foundry in Tours, France later on that year. The work was delivered in 27 pieces, loaded in wooden crates and put together on-site over five days. The sparks flew as the welders worked and then the vibrant color was painted on.

The $128,000 expense of commissioning, producing, shipping, and setting up the sculpture was shared by the NEA, local philanthropic foundations, area services, and private citizens. The better half of former FDIC Chairman L. William Seidman, Sarah “Sally” Seidman, was described as “critical” in bringing the artwork to Grand Rapids.

There is a 1/23-sized model of La Grande Vitesse showed and mounted near the base of the stabile itself, produced with Calder’s approval by the Keeler Brass Co. in 1976. It was donated by Mike and Mary Ann Keeler, initial factors in the acquisition of the substantial sculpture, and created by the company Mike Keeler’s grandfather and terrific uncles established in the late 1800s so that blind visitors to the place could “see” the sculpture in its whole.

The Civic Center in which the sculpture is sited was developed by Chicago architectural company Skidmore, Owings and Merrill. The site features two black, rectilinear, curtain-walled structures for City Hall and Kent County, surrounded by a concrete plaza. The county building, which is much shorter with a larger footprint, functions has an enlarged recreation of a Calder painting on its roof.  The building and sculpture jobs belonged to a downtown urban renewal effort. The area is officially called Vandenberg Plaza, after Senator Arthur Vandenberg, however is commonly described as Calder Plaza.