A woman in Bloomfield Township just found a fresh upside for sheltering in place: getting to know who’s in your backyard.

In her case? A white squirrel. Like the occasional white deer, they’re rare.

Meredith Meyer said the comely creature was easy to spot. “I was taking my dog out in my yard and I caught a glimpse of it. It’s really noticeable because it’s really white. I took my dog inside because I wanted to grab my new camera. It had relocated to another tree but I spotted it right away,” Meyer said.

“I’d be interested to know if anybody else has seen one of these. He was really, really cool. Just for the record, I did not use Clairol on it,” she said, chuckling.

The Free Press is sending Meyer to the white-squirrel pages of UntamedScience, in case she wants to report her sighting. The website tracks sightings around North America. A map shows several sightings around metro Detroit and also half a dozen towns in eastern and central U.S. where white squirrels are downright numerous. But their closest haven to Detroit is Exeter, Ontario, northeast of Port Huron, which bills itself “home of the white squirrel” — at least in Canada.

The website echoes just what Meyer said: That her squirrel, because it has dark eyes, is not an albino, which is even rarer and possesses red eyes. Instead, hers is a “white morph.” Both morphs and albinos are freaks of nature but they’re natural mutations, according to wildlife experts. 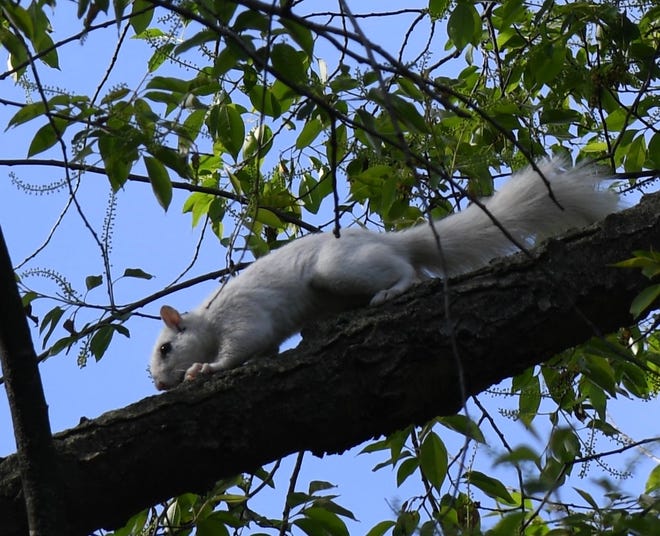 Meyer said she spotted her backyard visitor at 8 a.m. Wednesday.

“I trespassed into my neighbors’ yard, in my pajamas, because I wanted to catch it” on her camera — a recent gift.

“I think during quarantine, I’ve seen so many of my friends posting pictures of wildlife. We’re all spending more time at home. We’re enjoying our homes a lot more. That’s why my family bought the camera for Mother’s Day. I would not have gotten those pictures with my cell phone,” she said.

She hasn’t seen the white squirrel since, even after planting herself on her patio. No one else in the neighborhood has either — at last, none chimed in on Facebook about it. She’s hoping the furry newcomer is safe in woods at the back of the family’s big yard.

“My only worry is, we have had a coyote sighting, and because he’s white, they say the white animals are more vulnerable to predators,” she said. According to online nature sites, white squirrels are an easy target for hawks as well.

Meyer reached out to the Free Press after recalling a story in 2018 about a white deer, spotted at Kensington Metropark. That was an actual albino, with a pink nose and highly unusual blue eyes. The albino deer has been spotted as recently as about a month ago, Metroparks spokeswoman Danielle Mauter said Friday. Read Original Article