When are Squirrels most active?

Comparable to human beings, squirrels are most active during the day and finding shelter during the night where they’ll settle up until the next early morning. Numerous homeowners are asking if the sounds originating from their attic throughout the day come from squirrels or other pests. Squirrel control company in Lansing will be able to discover where squirrels are entering the home. While the only method to identify the animals that are hiding in your house is to have a professional inspection, there are a couple of attributes distinct to squirrels one can use to identify them. Among the most significant issues about squirrels is whether they’ll be walking around during the night.

A Day in the Life of a Squirrel

If you’re worried about sounds in your attic late at night, it’s not likely to be a squirrel. During the night, squirrels will settle down and spend the night resting in their den.

If there are any squirrels in your house, you’ll most likely notice them throughout the day. Given that the number of pests that could reach your house is restricted, if you hear sounds coming from your attic in the middle of the day, the chances are a squirrel is the culprit.

If you suspect a squirrel presence in your home, give a call to an expert wildlife control business. Squirrels in a home are a threat for several reasons.

They can do some real damage to a home, such as:

Are Squirrels Active At Night 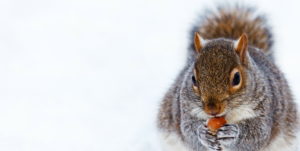 If you hear suspicious sounds from your attic such as scratching, running, rolling in the night, it is much more likely that the intruder is mouse, rat, raccoon, or opossum. These animals are nocturnal animals, which implies that they are passive during the day and active throughout the night. These rodents try to find food when the night falls, so you can expect them to be nocturnal animals and not the squirrels. In this sense, if you hear suspicious sounds in your attic throughout the night, a squirrel probably isn’t the animal that is creating them.

On the other hand, if you hear shrieking and rolling sounds throughout the day in your attic, it is highly likely that you have squirrels in your home. Squirrels produce this rolling noise when they bring in nuts in their shelter. Squirrels are known as food collectors-they build up food sources for cold periods when there will not find food outside.

Squirrels in your home interact with each other; communication generally occurs throughout the day, as squirrels are mostly day-to-day animals. Squirrels that are active throughout the night aren’t very loud and actually don’t communicate a lot, so there is a really low possibility that you will hear them making any type of noise.

Normally, it is a really rare situation that you will hear or see squirrels throughout the night since squirrels aren’t active after the night falls. They tend to sleep at night. Squirrels are active during the day, especially in the morning and in the late afternoon. This is when they run around and try to find food.

Read More On
Is Squirrel Damage Covered By House Insurance